Pretty much everyone who lives in Florida knows where Key West is, but in case you don’t it’s the southern most tip of the continental United States and the last inhabited island in a chain of islands known as the Florida Keys.

Key West is known for fishing.  It has some of the most accessible and diverse fishing environments in the United States. Due to the layout of the islands and the channels you can often get out on the water even when it’s very windy.  You can get to deep water about 6 miles out on the south side and you have the shallow bays and Gulf of Mexico on the north side.  You can troll for Mahi in the morning and then fish the gulf wrecks for cobia in the afternoon if you don’t mind burning the gas.

Spring is generally known to be the best time of year for fishing but winter is also very good in Key West as well. The only drawback is it tends to be windier and also grouper is closed to harvest January 1st to May 1st. These fish can still be caught but they will need to be released unharmed, which is hard to do because they are probably the best eating fish in the ocean.

In the spring there is a tarpon run.  Thousands of huge tarpon converge on the islands and cruise the flats and channels around the islands. These huge fish can be up to 150# and put up a huge fight when hooked. Due to these fish having very low food value this is a catch and release fishery. Tarpon fishing is very popular and it’s not uncommon to see multiple boats fishing the same small areas where they congregate.

For the more pure sportsman, sight fishing the flats is also very popular in Key West. This where essentially you hunt for fish on the shallow saltwater flats on a flats boat, which is essentially called a bass boat every where else in the country.  This shallow running boat is equipped with a stand in the rear of the boat where the captain can push the boat along with a pole silently so you can sneak up on fish in the shallows. Like fishing for tarpon, this is primarily catch and release. 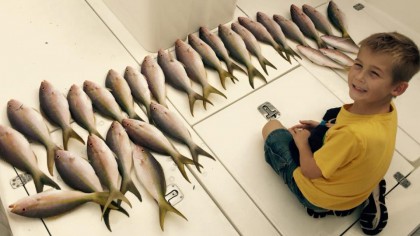 Yellowtail fishing is the opposite of the tarpon and flats fishing in the goal is to catch and eat as many as possible. Yellowtail snapper are delicious and they form huge schools on the reef with thousands of fish.  These fish are primarily targeted by anchoring and putting out a chum slick to attract them to the boat. Although they are not that large, you can keep 10 a person and they are great to eat so nobody releases them.

If you are planning a trip to Key West to come fishing and want to learn more get in touch with me at my site keywestfishing.link or to see recent fish caught in Key West follow my on instagram @fishkeywest

About the Author: My Florida Fishing